skip to main | skip to sidebar

I've not been workin on the railroad

This season has been flying by. The engineering department has been hard at work thinking up new projects, like the turntable. But, work has been at a standstill on track construction.
It was fanally determined by the track department that construction will resume this fall with a new push to the west and south, through the yard and storage areas, and that some work must be accomplished on storage leads and car barns. Mostly, we will be happy with a doubling of the route and some minor realignment of the existing trackage.
In the meanwhile, development is ongoing on a handcar, a locomotive (perhaps two) and more riding cars. These are winter projects, so will follow track construction. Stay tuned.
Posted by Don at 9:38 PM No comments:

Construction on the railroad has taken a winter hiatus. While the area has not had much snow, the land has been wet and muddy. The work area has been cold and it has been windy. Were the builders being paid the customary 37 cents per hour(1896 prices), work may have been progressing despite the weather. However, all is not lost.

Railroad ties have been moved from an earlier storage area to the actual work site for track construction as have the rails which were stored along side. Now everything is in place to renew construction with the warmer weather. Other projects have been continuing at a reduced pace, but continuing none the less. Car and truck construction have been going on as has completion of the construction area. Next come a couple of grade crossings, layout for a turntable and grading for new track both east and west. Once the location for the next switch is reached, track can connect the work area with the main line. Superintendent expects this to happen this spring.
Posted by Don at 9:31 AM 1 comment:

Origin of a Name

The United Verde and Pacific (the original) connected the mines at Jerome, Arizona with the world via the interchange with the Santa Fe, Prescott and Phoenix. The narrow gauge trains skirted the mountains and proceeded west to Chino Valley, some 25 miles away.

Even today, Jerome is somewhat isolated. There is only one highway through the town. The railroads are gone, so are the mines. But in 1880, there was a serious problem. Rich copper ore was available, but no economical way to get it to a smelter. The owners of the United Verde Copper Co. realized the need and formed the UV&P. Narrow (3’gauge) for economy, the railroad was, nevertheless, built to high standards, never suffering a serious accident.

Jerome hangs on the eastern slopes of Cleopatra Hill. The railroad clung to the mountain side as it navigated first Cleopatra Hill then Woodshute mountain to the north. Finally, it began a westerly path after numerous tight curves and trestles, and traveled the last ten miles in an almost straight line. Being narrow gauge, it had to transfer cargo and passengers to the standard gauge SFP&P at Chino Valley (then Jerome Junction). This labor cost eventually worked against the line, causing its eventual demise, as other lines made their way out of Jerome or Clarkdale, at the foot of the mountain.

Nothing is left of the railroad today, save a few foundations. But, most of the right of way (railroad talk for the path it traveled) is a forest road and mostly passable to vehicles with a bit of ground clearance. There is a book about the road that includes a description of the mile-by-mile journey and points of interest along the way.

My wife Martha and I made the trek in our two-wheel-drive pick-up. We left the pavement at Chino Valley and worked our way toward and then into the mountains. As we negotiated the many turns along the sides of the mountains, we were shown continually changing vistas. We were sometimes going through deep cuts made to allow trains to follow a reasonable grade. At other times we clung to the shelf as valleys or canyons opened before us. It was a little nerve tingling at times, but the views were great and we entered Jerome from a shelf somewhat above the remains of the open-pit mines. A very different view of the town can be seen from this perspective than from highway 89A, which passes through Jerome.

At the mine site, some tracks remain, but they are remnants of another railroad which followed after the UV&P, and which carried ore from the mines to the new smelter at the town of Clemenseau (now part of Cottonwood). At the time of the UV&P, the smelting operation was at Jerome. Fires in the mines forced the closing of the smelter and converting the mining from underground to open-pit. The UV&P operated from 1896 through 1920.
Posted by Don at 2:15 PM No comments:

Pondering the route of the United Verde

Well, in the first post, I mentioned that the United Verde and Pacific was heading eastward toward the town of Mineral Springs, which is actually south (confused?). As the railroad develops, thoughts of place names and sidings and things develop in the mind of the builder. Mineral Springs was always planned to be built but didn't have a name until I was typing that first blog post. Suddenly, the townsite had a name. Because the railroad will pass by the leach field of the waste water plant (septic system), and the town will be located along a curve in that area, Mineral Springs came into being, at least in concept. The town should eventually have a couple of buildings, a siding and a team track. There will be a stock pen and whatever else gets conjured up as the trains arrive. 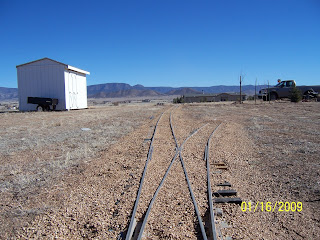 Actually, the first location on the railroad map is Summit, home of the line's general offices and facilities. Summit is very near to Rock Creek where construction began. I don't know what might be built there as yet. Developments depend on what becomes of the maintenance and storage facilities. Stay tuned. Thanks for visiting.
Posted by Don at 1:32 PM No comments:

Creating this blog hasn't been too difficult, so far. I guess Google has done most of the work, but finding out what you can do is interesting and a new learning experience. I am about to be 65 years old and subscribe to the theory that if you stop learning, you stop living. That said, I guess if anyone is reading these postings, when things stop or stop changing, I'm dead.

This message has nothing to do with the railroad, I guess, just how this site came about. Actually, I have another live steam railroader to blame. Erin Swain lives north of me, in Flagstaff, AZ and keeps a blog of his adventures with his railroad, the Flagstaff, Coconino and Western. I found it interesting and signed onto "Blogger" to see what it was all about. There you have it, hooked on a new adventure. Thanks Erin, I think!

Welcome to the United Verde and Pacific Railroad. Following intermittently; a description of the progress (or lack) in building a 2.5" scale railroad. The namesake railroad was built not far from the present location in order to haul gold, silver, lead and copper ore from the underground mines at Jerome, AZ. The reborn railroad is being built to carry people and other critters, because the builder loves trains and model building. As of this date, the railroad has some 200 feet of track in place and set in an initial layer of ballast. As winter progresses, ballast will settle and more will be needed in the spring. In the mean time, construction of track panels will continue as weather permits and time is available. Also planned is additional rolling stock and a locomotive for continued construction. 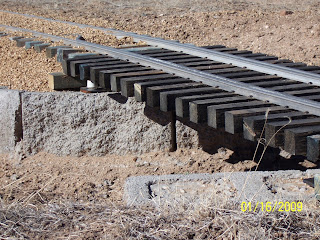 Track laying began this summer (2008) at Rock Creek with the construction of the Rock Creek bridge. Construction proceeded west to the yard lead and maintenance facility turntable (future).

Track also forged eastward into east-range and toward Mineral Springs and Navajo Tank, yet some distance away. Stay tuned.
Posted by Don at 1:31 PM 2 comments:

Don
Prescott Valley, Arizona, United States
My mame is Don. I am the editor of two very different blogs. The United Verde and Pacific Railroad blog about my adventures in building a large scale ride on railroad and the Christian Entertainers Network blog which is a resource for children's entertainers and teachers. I am retired, but that doesn't seem to allow me free time to pursue my interests as there is always something to do.

Other Sites of Interest (to me)